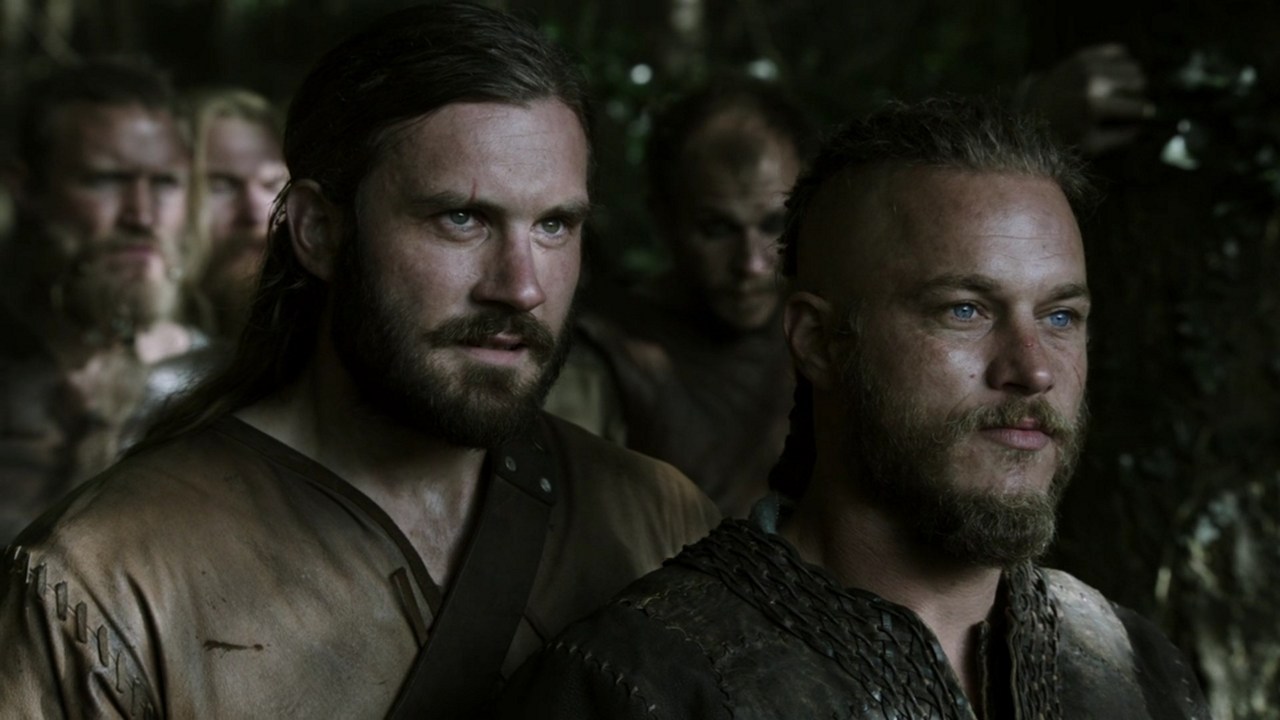 These days, it seems I won’t watch anything unless it comes highly recommended, and History’s Vikings came highly recommended. Following are my thoughts on the first season of this superb series which premiered in 2013 and is gearing up to begin its sixth season.

Though I assumed conquest and carnage, I wasn’t sure exactly what the series was about. Vikings is the story of Ragnar Lothbrok, a legendary king and hero whose tale is told in the Volsunga Saga of the 13th century. This I found interesting and reassuring, as the characters — from Ragnar to Lagertha to Rollo — are based on both historical figures and literary sources and not just made up, say, like the main characters in Titanic.

Following Ragnar through the season, I found him interesting enough at first both as a father and adventurer. However, as I progressed in my viewing, I found myself caring for him less and less. I appreciate those moments when he wants to learn about his English adversaries, but by episode 8 (“Sacrifice”), I had lost all respect for him on account of the secret he keeps from Athelstan. With episode 9 (“All Change”), I found myself bored and annoyed with him and actually siding with Rollo for once. Inversely, though I never disliked Lagertha, by episode 9 I had nothing but the utmost respect for her. Lagertha can lead an earldom; Ragnar can’t even solve a land dispute.

The most enjoyable episodes are those where they’re off on discovery and conquest. Episode 2 (“Wrath of the Northmen”) and episode 4 (“Trial”) are easily my favorites. And they are good. The season is good, but I care more for the adventures away from home, not the politics of Kattegat or land disputes across Scandinavia. So, while the scenes with Gabriel Byrne as Earl Haraldson are great on account of the man’s talent, and while their time in Uppsala is educational if disturbing, it’s all domestic matters, and I simply prefer the education of the sacking of the monastery at Lindisfarne instead. I probably learnt that name once. I’d heard about the Viking Age. But having a dramatic depiction of how it all began was pretty awesome. That’s the strength of the series for me — the depiction of major historical events — while I can see how Uppsala would be the strong point for others more interested in how the Vikings lived at home. While I could say the show is balanced depicting both, season one heavily weighs on the side of internal affairs, and I hope that changes as the series continues.

The bewilderment the Vikings express in Lindisfarne I find most fascinating. Clearly, pious Christians and unguarded gold are completely out of place in their world view. Enter the giggling Floki. Slighty-mad and amused by much, Floki is the opposite of the perpetually-troubled Athelstan. It’s Floki’s bemusement at the oblivious Christians attending Sunday mass during the raid on Hexam that won me over to the series.

Not only does Floki design and build the ship the Vikings first use to cross the North Sea, he’s also a decent enough warrior during their expeditions, and it’s the little things — like his admiration of a well-built table — that make such a quirky character endearing.

Though many of the Viking customs shown in the series I could do without, their courage in the face of death I find admirable, especially as it is contrasted with the English of the show, exemplified by both the timid Wigea and the dithering Aethelwulf. Not fearing death allowed the Vikings of season one to take risks, taking on the unknown ocean and the English though their numbers were small and their steel inferior, and I’m looking forward to depictions of their excursion into Francia and the establishment of Normandy in the seasons which follow.

When not exploring virtual worlds, he enjoys taking walks in the real world and brewing delicious coffee.