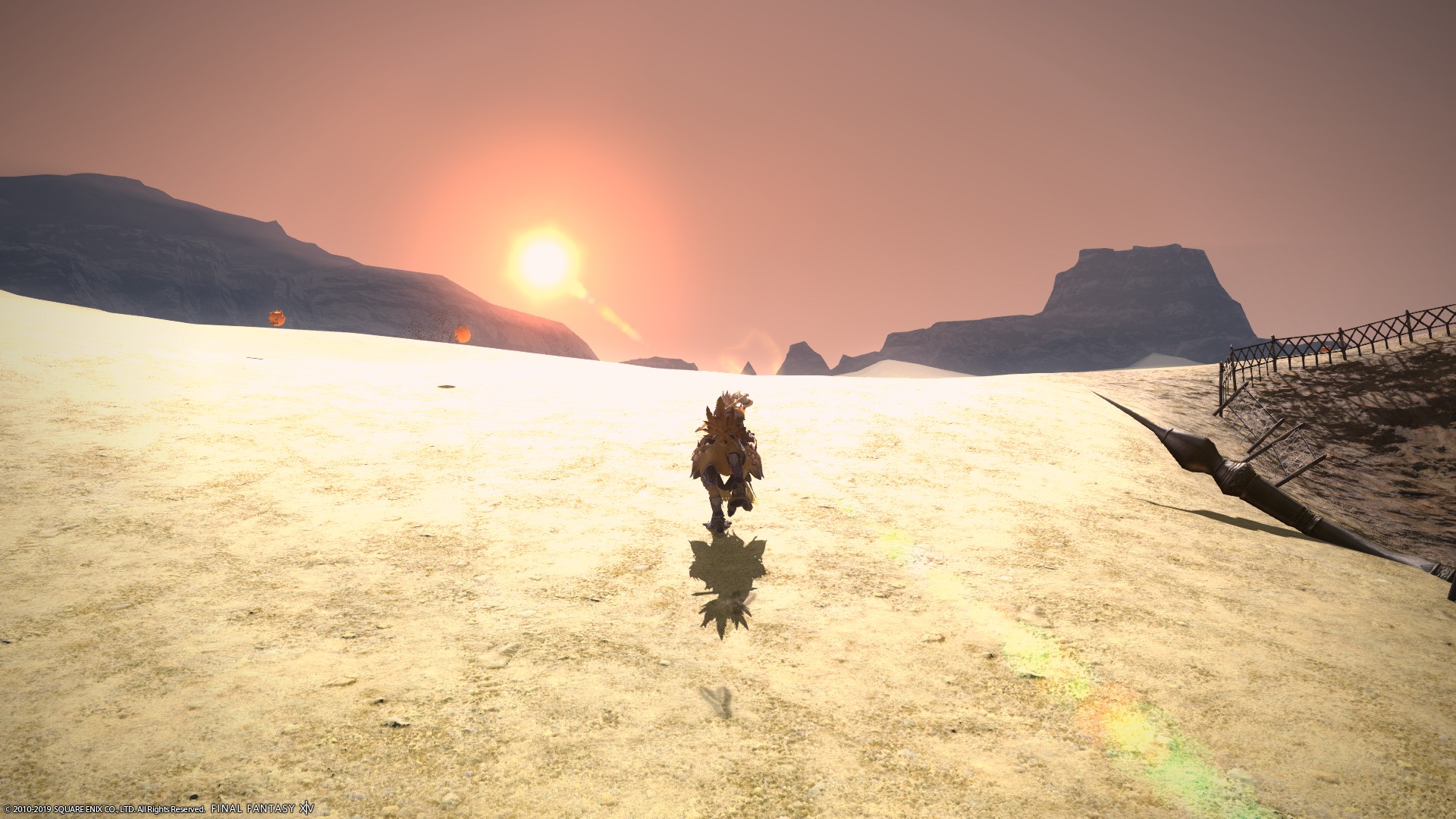 After nearly six years since Final Fantasy XIV: A Realm Reborn entered Early Access on August 24, 2013, I finally completed the Main Scenario Quests for the 2.0 content. Operation Archon was a success, the Ultima Weapon has been destroyed, and I’m ready to move on to the Heavensward 3.0 content.

Ah, but not so fast.

I’m a bit of a completionist, so I thought I’d at least make some progress on the old endgame content of A Realm Reborn. Though I only sporadically played the game over the years, I knew Square Enix was constantly adding new Primal content. So, I got the early portions of the Primal Quests done. Additionally, there are the Beast Tribe Quests. The ones with the Amalj’aa I had previously unlocked. These quests are quite fun because you get to see a different side to the beast tribes you’ve been slaughtering for fifty levels. I particularly like the quests with the Kobolds.

There are some miscellaneous quests involving relic gear and what not. This would be the old endgame gear for A Realm Reborn, and it’s interesting how Square Enix manages to make a story out of everything. Most MMORPGs are like: “Go run some content, get some new currency, buy some gear.” Final Fantasy XIV makes an event of it all.

This commitment to storytelling comes out particularly strong with unlocking the hard mode of old dungeons. I’ve always hated content like this. The Mythic+ dungeons of Blizzard’s World of Warcraft are especially grievous. I want new content, not more difficult old content. This is where Square Enix comes through. You actually have to unlock the hard mode dungeons through quests, and the NPCs along the way make it perfectly clear: you’ve been here before, we need you again, things have gotten worse. I’ve yet to delve into any of these more difficult dungeons, but I am impressed. Square Enix took what I consider a lazy MMORPG trope and gave it a story. I’m finally at a point thanks to this game where I have respect for Square Enix again, something that had been slipping over time and lost in March 2010 with Final Fantasy XIII, the game that really wasn’t a game, just a cutscene-ridden piece of media more than happy to be “played” on autopilot. It’s the game I let the CPU handle a boss fight and went and made lunch. And don’t even get me started on the content Square Enix has thrown up, and continues to throw up, on Steam. But here is a shoutout to Naoki Yoshida for taking the failed 1.0 version of Final Fantasy XIV and turning it into the incredible work that it is today. His team has gotten me to take the company seriously again.

While the content of Final Fantasy XIV is largely serious in tone, there is a certain amount of humor to be found in the game, the aforementioned Beast Tribe Quests with the Kobolds being one example. However, nothing in the game can prepare you for the Hildibrand Quests. I’ve only just begun them, and they are precious to me. Additionally, there is something with the Moogles, and I ran through the quests with the zombie Hab and his Cactuar friends. Who knew brilliant comedic material would eventually be found in Final Fantasy XIV?

So, the Ultima Weapon was destroyed, NPCs declared the start of the Seventh Astral Era, and the credits rolled. Yes, Final Fantasy XIV has end credits at the completion of the main story for 2.0. Seeing the end credits in a video game has always been a sign of accomplishment, and I can still remember as they scrolled over the effect of flying through space at the end of Final Fantasy II for the SNES back in 1992. Final Fantasy VII from 1997 even has its own post-credits scene. These are single player games, however, and I cannot recall ever encountering end credits in an online game because they simply do not end. There’s always more, and most MMORPG games are all about endgame anyway. That’s what the developers seem to focus on; that’s what the players bitch-and-moan about. It’s always a rush to get to endgame, and if endgame doesn’t have a shit-ton of content, gamers are going to whine. Thankfully, as previously mentioned, Final Fantasy XIV is nowhere like that. Giving the player end credits in an MMORPG is really saying something because you’re done. Literally, you’ve completed the story. You’re free to move on to other games having completed this one.

But Final Fantasy XIV is an MMORPG, and if you want to keep playing, there is a shit-ton of content to be found in the old A Realm Reborn endgame. Like, a lot. Like, holy shit. Everything I’ve already mentioned — from the Primal Quests to the Beast Tribe Quests to Hard Mode Dungeons to that crazy stuff with Hildibrand — is only scratching the surface. Somewhere, there are raids to be found, that old MMORPG trope. I know there is a series with Bahamut, but I haven’t even gotten whiff of the dragon yet. Now, I’ve begun these quests with Minfilia in the Waking Sands which I assumed served as a short little bridge to bring us to Heavensward content. You know, some tiny little quest chain released right before an expansion that sets you up for the expansion. Oh no. No, no, no. This is merely a planned move to Mor Dhona, not the beginning of an adventure into Heavensward content. I think this is related then to the Crystal Tower content with Cid, and I still have no idea where Bahamut is. Wondering just what in the Seven Hells was going on, I got on the Internet. What I found was shocking.

I am on a quest called “Rock-solid Protection.” It’s part of the Seventh Astral Era Quests. It’s number seven. There are ninety-three more quests in this chain. Yes, while Heavensward may be the 3.0 expansion to Final Fantasy XIV, after the 2.0 A Realm Reborn story, there is a whole ‘nother story. Spanning the chasm between A Realm Reborn and Heavensward is a quest chain which rivals that of the original story. Mind you, the credits have already scrolled. There is an expansion to be had, but here’s the thing: you can’t skip any of this. Those prudes at Foundation in Coerthas Central Highlands won’t even let you into Ishgard until you’ve run through all of this. I’m used to material being added to MMORPGs in incremental patches but nothing of this magnitude. I mean, normally, they’ll add something and have a little starter quest, but you can skip all that material and move on to the next major expansion when you come to it years later. Not with Final Fantasy XIV, and that’s a good thing. A Realm Reborn has an endgame. With a story. It’s long. And you have to play it before beginning Heavensward. There is just so much content here. Like, how? How did they manage to produce all of this? When I’m not being overwhelmed by all this content, I’m impressed Square Enix had the guts to make it so A Realm Reborn‘s endgame content is still relevant even after the introduction of Heavensward, Stormblood, and now Shadowbringers. Final Fantasy XIV makes American MMORPGs look juvenile in comparison, and that’s where I am now: embarrassed by my own culture’s video games. I haven’t felt like this in over a decade. So let’s just face it: whatever Americans can do with video games, the Japanese can do better. Except first-person shooters. We do those well. You know because we like guns.

Hopefully by Christmas I will be caught up on Final Fantasy XIV content. I could just buy A Tales of Adventure package and skip all this story so that I can partake of Shadowbringers now, but I don’t think I’d be able to forgive myself. The content exists, and I’m going to play through it. Previously, I felt it was kind of cheap Square Enix offered such packages just like in World of Warcraft, but World of Warcraft is just leveling to endgame with some bits of mandatory story here and there. The game tramples over its previous endgame content for each expansion in an effort to get you to the current expansion’s endgame as quickly as possible. Hell, they give you level boosts with each new expansion. Basically, in a game with alts, if you’re lazy, go ahead and pay to get that alt to endgame. With Final Fantasy XIV, one character can play all classes, and each of those classes has a story. Each expansion has a story. Each of the endgames has a story. I can totally get why people would pay to skip previous content in Final Fantasy XIV. There is just so much of it that is mandatory; you can’t reasonably be expected to go through it all in a rush if you haven’t kept up. So, I won’t be playing Shadowbringers content any time soon. Seven Hells, I don’t think I’ll even be playing Heavensward content any time soon. This is going to take some time, but I’m enjoying the journey.