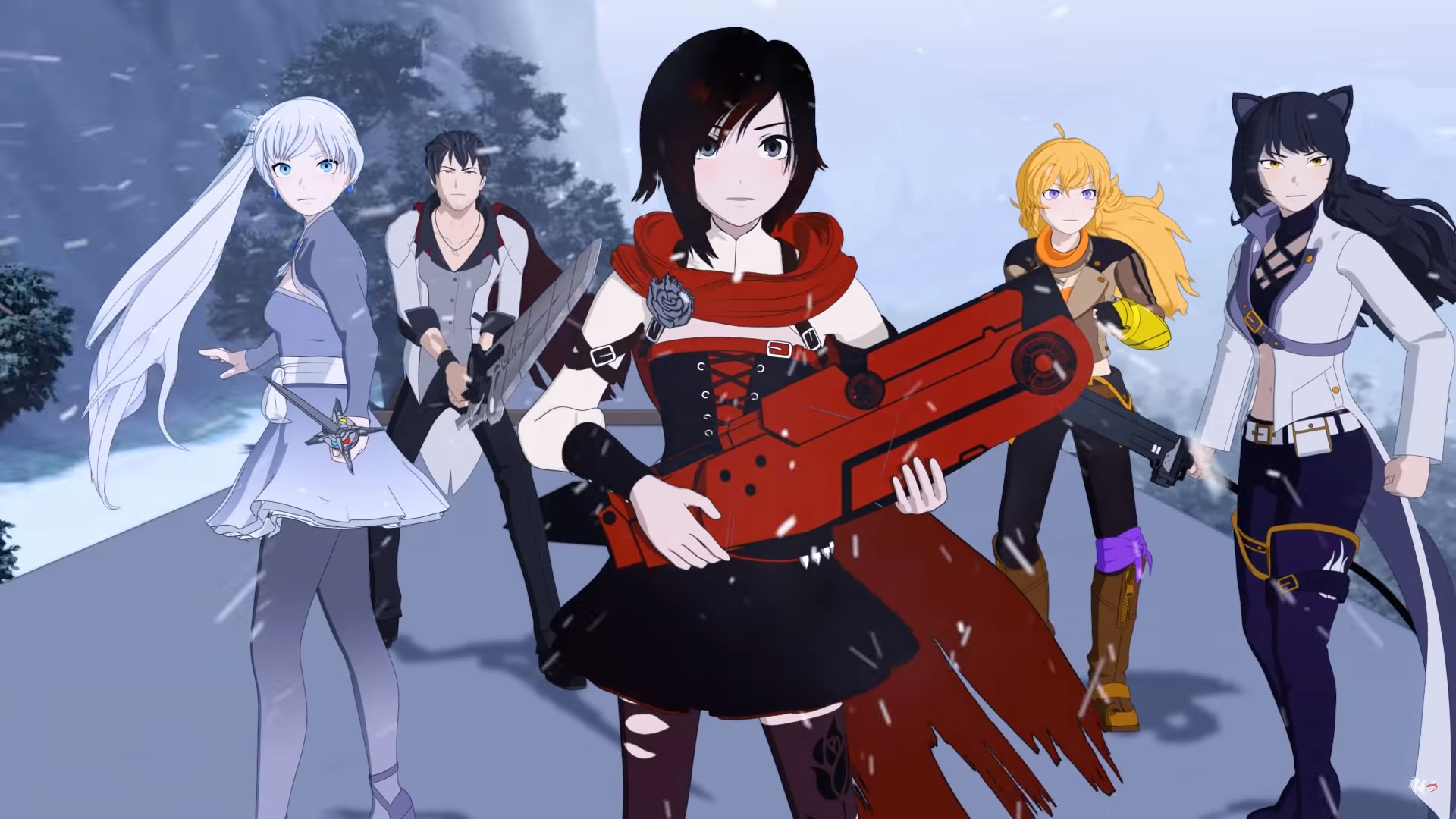 Recently, I finished watching Volume 3 of Rooster Teeth’s RWBY, resumed and finished Volume 5, and then caught the trailer for Volume 6 when it premiered this Tuesday, October 16th. I am definitely looking forward to this new season, and what follows are my thoughts on Volumes 3 & 5.

Unfortunately, I watched most of Volume 3 while I was simultaneously afflicted by a cold and allergies. Neither were that bad, but I worry they somehow diminished my appreciation of Volume 3. After the season got off to a good start with the Vytal Festival fights, I found myself bored by the continuing focus on the tournament. So when we got a flashback to Cinder, Emerald, and Mercury fighting the Fall Maiden Amber, I perked up after nearly an hour of uninteresting content. I like Amber’s design. I like her fighting style. With Amber, we get to see some use of magic in the world of Remnant, and the stream of fire she shoots from her staff at the attacking Mercury is just too cool.

What I learned from that fight is it’s the uneven team fights I like the most. That is: when it’s one against multiple attackers as in the Amber fight or the Ruby fight at the start of Volume 1, or when it’s a team against an impossible opponent, like the soon-to-be RWBY against the Nevermore in Volume 1, RNJR against the Nuckelavee in Volume 4, and, most especially, RWBY against the mech Torchwick pilots in Volume 2. It was CEM against Amber that got me to realize that.

Having watched the seasons out of order, I basically ruined the ending of Volume 3 for myself. I already knew who died and the consequences of the battle. However, I did not know how certain characters died, and their deaths still affected me. I was impressed by the inquisitive, unrelenting Ruby as the Battle for Beacon played out, and I was not expecting what we got when she confronted Cinder. I was expecting a prolonged fight and the graphic loss of an eye, just as I was expecting a lengthy fight between Adam and Yang where the latter loses her arm. There is nothing wrong with how things played out, just they didn’t play out as I expected.

On the other hand, Volume 5 played out how I expected, but I don’t think its predictability a bad thing. I’ll take it that by the end of Volume 5, I was getting better at reading and understanding the structure of the series, of anticipating the decisions the writers would have to make. The conclusion of Volumes 3 & 5 are similar with lots of 1v1 and 1v2 miscellaneous combat, and for the most part it works, but, as above, it’s not something I’m particularly interested in. The Raven and Cinder fight is the one that stood out because it was different on account of their use of maiden magic. The highlight, though, for me was Weiss. Weiss falling to Cinder’s spear, Weiss being the catalyst for the unlocking of Jaune’s Semblance, Weiss being annoyed that her injury has her unable to join in as the others fight, and Weiss summoning that big ass bee.

Just when I thought Weiss couldn’t get any cooler, she goes and summons a Queen Lancer. Her look is priceless when said Queen Lancer gets destroyed. She is greatly disgusted.

Ruby is the other standout character from Volume 5 where she firmly establishes herself as a leader capable of giving commands in charged moments, like when she orders Yang to pursue Cinder et al. during Blake’s reappearance. Yang does not hesitate to follow that order. While Ruby is the character that has arguably changed least over the series, here at Haven Academy we witness a major moment in her development with her declaration to Yang that she’s not okay, that she’s angry. With Penny’s death in Volume 3, Ruby fell to her knees and cried as Mercury walked away with a smile. Here in Volume 5, she rushes to the aid of Yang and stares down Emerald and Mercury, headbutting the latter as they engage in combat, further telling Mercury she’s going to do whatever it takes to shut him up.

This arc of strength and action we will no doubt soon see in Volume 6, as in the trailer when Yang asks Ruby what the plan is, Ruby responds: “Don’t let anyone else die.”

RWBY‘s sixth season is coming this Saturday on Rooster Teeth’s website to those subscribed to its First package. However, Fathom Events actually has the premiere with an hour and a half event on the big screen tomorrow, October 25th. I’m attending, but I promise to reveal no spoilers on the Internet until S6E1 is available for all.

Stephen Oravec is a writer living in Oregon, Ohio.

You can probably find him in the English classroom at The University of Toledo or Terra State Community College.