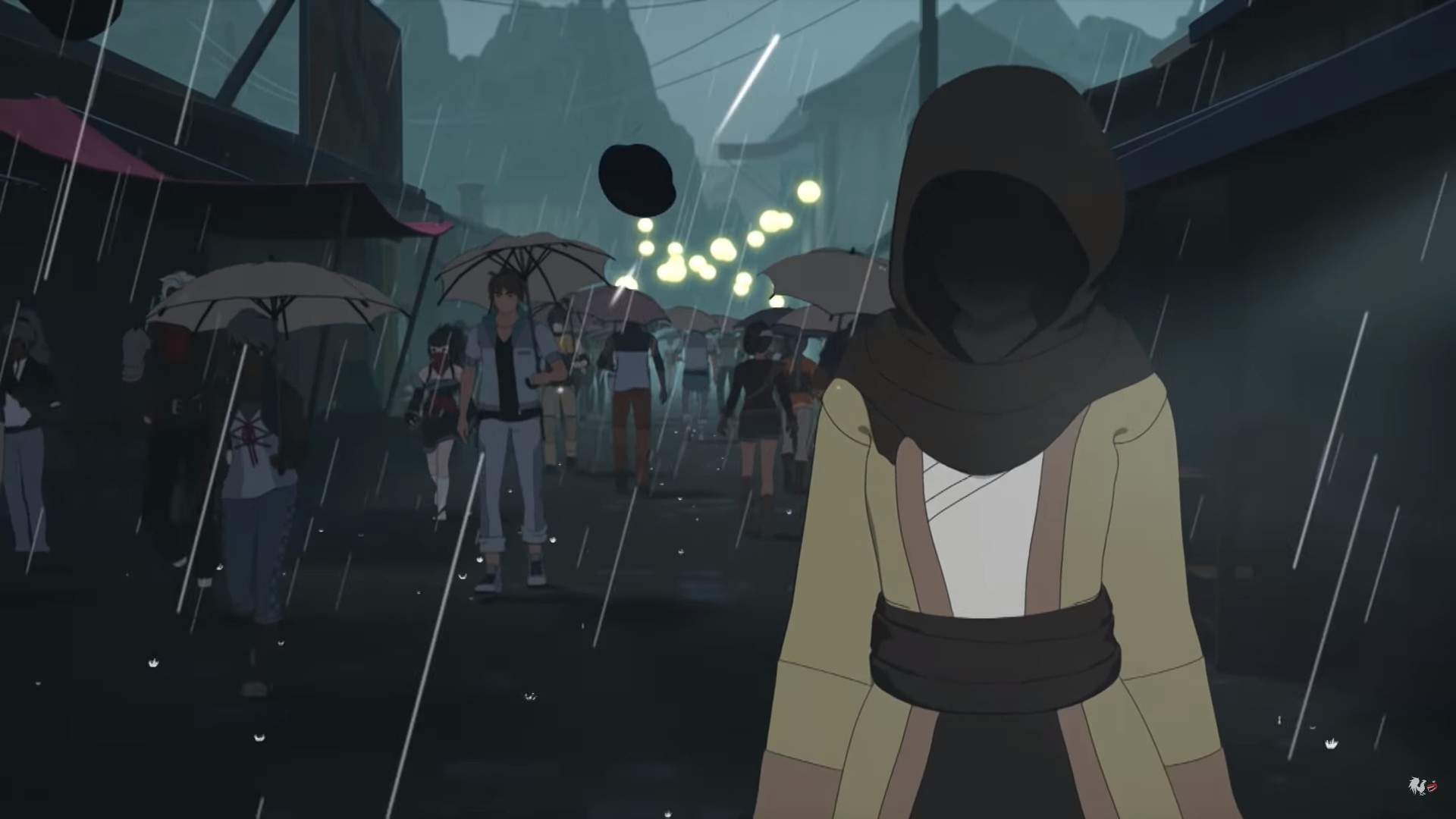 Rooster Teeth’s RWBY returned to the Internet this past Saturday for its sixth season. Though the season’s first episode is currently behind a paywall courtesy of Rooster Teeth First, the season’s intro is readily available on YouTube. What the intro reveals are some pretty strong hints as to the whereabouts of Cinder, Roman, and Neopolitan.

The return of Cinder Fall, the Fall Maiden, shouldn’t really come as a surprise. At the end of Volume 5, she was defeated, frozen, and falling into darkness … but we never heard a thud or a shatter. As Raven broke through a similar freezing, presumably so too could Cinder, especially with her command of fire. Additionally, no indication was given that the Fall Maiden’s powers had been passed on, something that occurs upon their death. And so there she is on the sixth season’s poster, her back turned, the claw of her Grimm limb apparent.

In the intro for season 6, we observe a cloaked figure walking through a village as rain falls. While this could seemingly be anyone, there is a telltale sign which reveals this to be Cinder: her left hand. While the figure’s right hand is bare, its left is covered, seemingly bandaged. There is only one person we have encountered on Remnant that would have need of concealing her left hand, and that is Cinder Fall. Furthermore, as just two weeks before the start of this season’s events she had fought the Spring Maiden, it’s conceivable Cinder’s Grimm limb is indeed injured and in need of bandaging. Its properties could have saved her in her fall and, consequently, been strained.

What happens next has had a lot of us talking, and I originally thought it indicated that the cloaked figure was Neopolitan. No doubt about it: that is Roman Torchwick’s hat which blows by.

Roman was last seen in RWBY‘s third season being devoured by a Griffon Grimm. One might assume he’s dead. However, that Griffon shortly thereafter got head stomped by Ruby Rose into the Atlesian Airship on which Ruby and Roman were fighting. And then there was an explosion. So, as in the case with Cinder, a corpse was never actually shown, and it’s conceivably Roman freed himself from the belly of the beast. Either that or the Griffon coughed up his hat and it’s just been blowing on the wind for a few seasons.

One more thing to notice, though, from the pic above is the color palette. The pink, brown, beige, and white clearly reference Neopolitan’s colors. That nod is far more significant.

Neo exited the series by simply blowing away on her umbrella thanks to the quick thinking of Ruby at the end of season 3, so there was always the possibility she would drop back into the series alive and well. I’m betting the colors, umbrellas, and Roman’s blowing hat are meant to signal Neo’s imminent return.

While I originally thought the cloaked figure was Neo, I no longer find that plausible, as when the cloaked figure fights an unseen assailant in the tavern sequence, we get a good look at that left hand. Yeah, it’s clawed. The cloaked figure is Cinder, and a quick comparison to the claw on the poster should make that clear.

What’s also to be found in the tavern sequence is a brief bunch of hair flying up from under her hood as the figure fights.

It’s dark and short and matches Cinder’s style from the previous season.

Additionally, during her fight with the Spring Maiden at the end of season 5, Cinder makes a hard landing and her hair flips up in a similar fashion.

Without a doubt, the cloaked figure in the intro to RWBY‘s sixth season is Cinder, and Neo is the most likely candidate to return when it comes to the Roman and Neo pairing. While Torchwick may indeed return, I’m going to bet he bought it at the end of Volume 3. I never expected Cinder not to return for Volume 6, and I’m excited for Neo’s return.