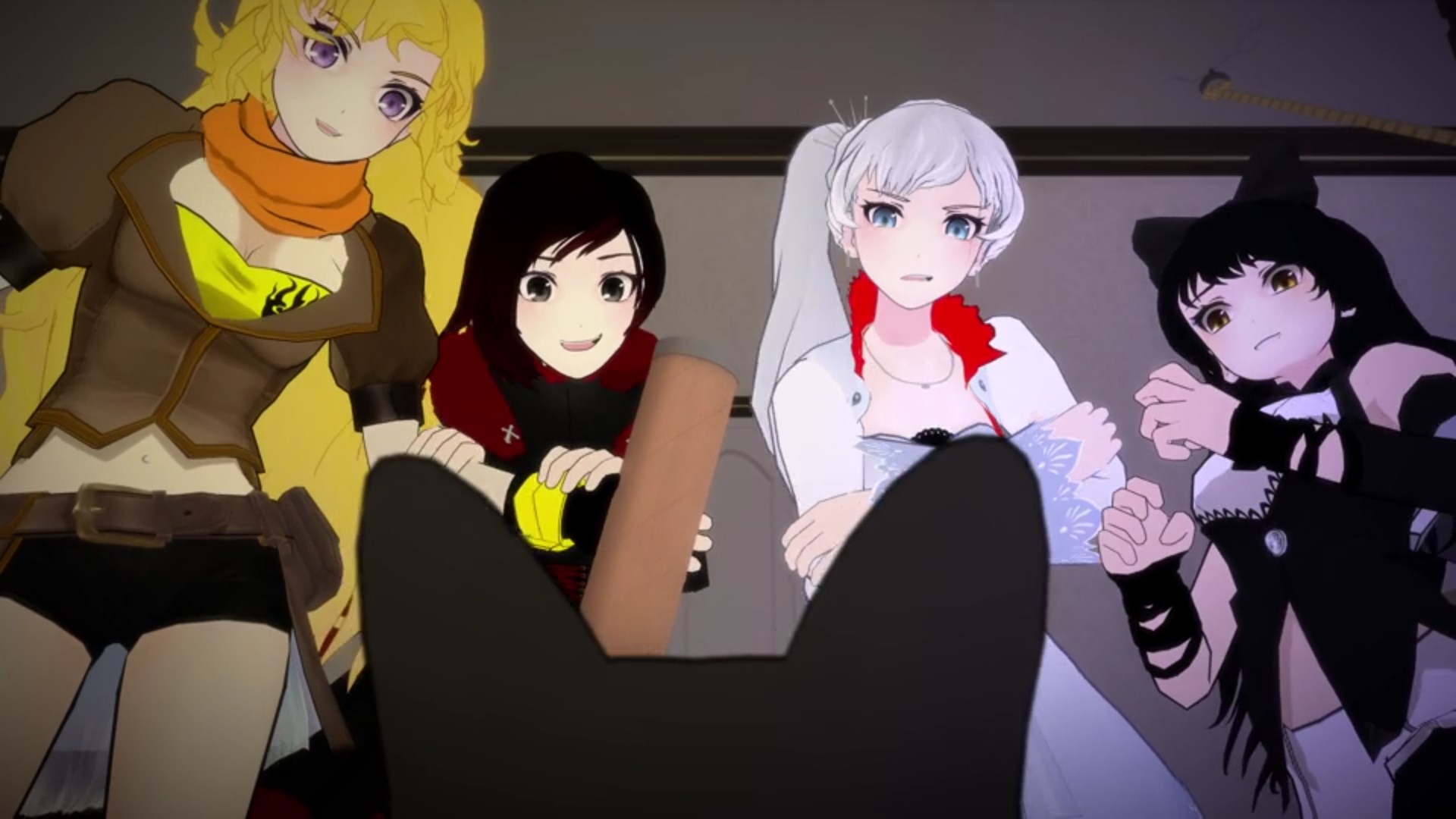 Rooster Teeth’s RWBY is a show I first heard about maybe a couple years ago. Having recently met two people who were familiar with the show — one a fan, one not — I decided it was finally time a few weeks ago to sit down and give it a shot.

Going into RWBY, all I really knew was that it was about a group of girls fighting monsters called Grimm, and one of them was probably based on Little Red Riding Hood. Oh, and I knew Rooster Teeth Community Manager Barbara Dunkelman was somehow involved. The art looked cool, but I was generally clueless as to the plot of the show and the world it was set in. As of a few weeks ago, I didn’t even know how the name was pronounced.

I wasn’t given much guidance as to where to start, only warned that the animation in seasons one through three wasn’t as good as for seasons four and five. And so I started with season four, reasoning that it would be a more developed starting point: the series would have been firmly established in its themes by then, and the animation would show more skill. A little bit of research revealed there was a time jump between seasons three and four, and that something of significance named Beacon had fallen. So I jumped into RWBY with season four.

And I was immediately confused. Season four begins with a gathering of bad guys, none of which I had any idea about. When we finally get to the group of Grimm slayers, it wasn’t even the four heroines of the cover art, but Ruby Rose and three others. Eventually, as I made my way through season four and consulted the RWBY Wikia from time to time, I started to piece together the show’s world. I liked the humor and character development season four delivered, and I was surprised when I was told that season four wasn’t all that good because “nothing happens.” For me, plenty had happened.

Episode seven, I’d say, is where the show started to get interesting for me. In it, we see Weiss’ weapon for the first time, and Qrow shows up to protect the kids from Tyrian. When Qrow wonders of Ruby who this overly dramatic guy is, she replies, “I don’t know. This guy’s weird.” Though that might not be the first time I laughed out loud watching the series, I’m pretty sure that was the first time I had to pause the show to compose myself.

The eighth episode “A Much Needed Talk” then had the interaction of Blake with her father Ghira and the [awkwardness] subtitle, and by then I was thoroughly enjoying the show. The world was dark, much had happened in the lives of the characters, and the show had its humor. So what was there not to enjoy?

With season five, I found the show becoming a richer experience. In the first episode of that season, “Welcome to Haven,” when it turns out the kids haven’t fully been filled in on the Maidens, a stressed Qrow snaps, “Look, there’s a lot to cover, okay? I quit teaching for a reason.”

Likewise, at the end of the episode, Ruby grows frustrated by the commotion in the living room and exclaims, “What is going on out there?! Can’t a girl read her comics in peace??” I like that in this fantastical world of Remnant, the characters still have the same normal problems we face in our world.

In the second episode of season five, “Dread in the Air,” I finally saw Weiss fight with her weapon for the first time, and, seriously, at this point the show was just too damn good for me. Everything about RWBY is done well. Weiss’ rapier takes some kind of elemental ammunition called Dust, and it can not only be used for melee combat but ranged as well. Every character in RWBY is a well-dressed badass, but Weiss is the best of them all.

By the time of “Alone Together” when Weiss brings Ruby and Yang coffee, I was totally smitten. I’ve never really done the waifu thing, but Weiss best waifu.

At then end of that episode, when Ghira goes all Wolverine berserker-style on the attacking White Fang, I knew it was time to stop and start taking in the show from where it began. That had me watching the four color trailers and holy $%#&^@ shit I was not expecting THAT! Up until this point, it turns out, I hadn’t really seen the combat this series is apparently noted for. And I sure as shit had never seen Yang fight; I had no idea she wore some kind of gloves that fired bullets. With the trailers, I was seeing what most fans of RWBY probably considered RWBY, yet the series had won me over with none of that.

The animation is, of course, far cruder. For the trailers and seasons one through three, Rooster Teeth used Poser, and then transitioned to Maya for season four. Personally, I like the older animation style better, and I like the camera work and choreography so much better. Yes, season five especially looks better, but the trailers along with seasons one and two are better. Watching them, it quickly became apparent how much the series lost with Monty Oum’s passing.

Granted, prior to the events at the end of season three (which I have yet to see), the characters lived in a more lighthearted world. Though Remnant is plagued by Grimm, season one establishes that it is a time of peace. Here, we see the four first begin their days at the school Beacon. Coming to the series out of order, this was my first exposure to the characters at school. While when I started watching RWBY I got Final Fantasy and His Dark Materials vibes, now I was feeling the series was more like Harry Potter meets Hong Kong cinema. Regardless, during Oum’s tenure, the show’s humor was more frequent and its tempo faster. However, I really don’t care for Weiss’ stuck-up attitude starting out, and I’m glad she’s become a better person as the series has progressed.

Season two is easily my favorite season. Its first episode is a food fight which is the most brilliant piece of animation in the history of animation. Seriously, here is the link to the episode at the start of the food fight. Just watch it.

If that wasn’t brilliant enough, the season’s second episode has them playing a Risk-like game in the library with probably some of the best dialogue exchanges in the series. Teams RWBY and JNPR are both present, and Sun and Neptune appear at then end. Though it’s largely played for laughs, we get so much insight into the characters through two devices: a library, and a strategy board game. As mentioned above, even in this world of Grimm, Hunters, and Huntresses, we still get the minor situations and conflicts we could encounter in our own reality. RWBY is a show relevant to the human condition while simultaneously being a fun ride. I can’t ask any more it.

I could go on and on, episode by episode, recounting the little brilliant moments of which the series is chock-full, but this post is already way longer than I intended. I wasn’t even sure I was going to write anything up on the series until I began season three. Seeing that stadium floating in the sky for the Vytal Festival with one half of the field ice and the other fire pushed me to write this. RWBY is a show so in tune with my own writing and what I want to write that I felt I just had to document it up until this point. I’ve only just begun season three, and I still need to finish season five, before season six starts on October 27th. Additionally, there’s the RWBY: World of Remnant mini-series and the character shorts I hope to get in before the start of the next season. I’m told season three is pretty epic, so I’m about to resume watching that now….